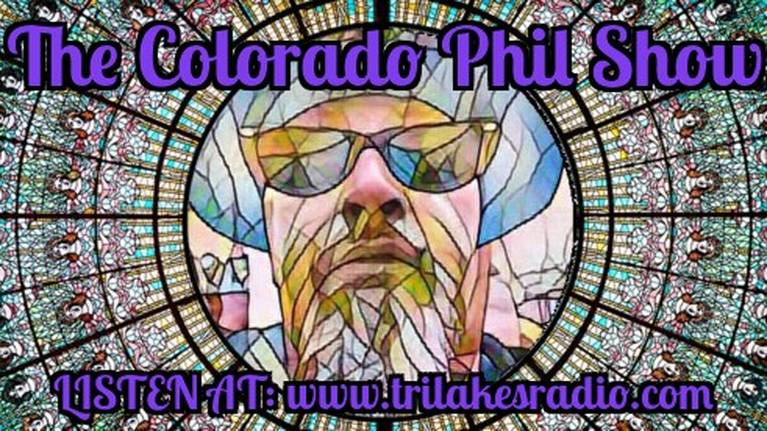 I've got a big following on Tri Lakes Radio - Monument, Colorado, U.S.A. and it is growing bigger on a daily basis. Chose to sponsor me and I will give your product or service the best advertising ever!!
The Colorado Phil Show first aired on Tri Lakes Radio on January 2nd, 2017. It was originally only a 3 hour show weekday afternoons but soon expanded to 4 hours. After just over a year in the afternoon slot, I decided to bring the show to early AMs in March of 2018. Listen from ANY country on ANY device EITHER from HERE on my show page or at our website: www.trilakesradio.com
Oddly enough, or perhaps not. The Colorado Phil Show is slowly evolving into an extension of me. It is who I am. I hope to redouble my efforts at my own self promotion in order to achieve the life I am seeking. Not to be a millionaire, no. But to have a comfortable life doing what I love. The Colorado Phil Show is then my personal vehicle that has the potential to go very far.
That being said, I hope to make connections with key people who CAN move my career upward in the direction I desire.
To that end, I am also looking at getting into any kind of big or small acting roles including voice acting. Heck! In this country of some 360,000,000 people a writer somewhere created a character to which I was pretty much the only option if they want to keep their character “genuine”(April 2018). Now, it’s not clear if this will eventually pan out and lead to more opportunities but that isn’t the point.
The point is this. I am the Creator/Writer/Producer and Host of a weekday morning independent music variety show called The Colorado Phil Show 5 to 9 AM MST. In putting on my show I am performing maybe 4 “radio station type” jobs. PLUS I am an immigrant from Canada with a romantic French Canadian accent to boot. It is my strong belief that based on that ALONE there have got to be many more opportunities in the acting(including voice) field where being who I am and doing what I do in the style that I do is EXACTLY what a writer somewhere in the U.S.A. wants. In a country this big it would be impossible to find that there are not. There is always someone, somewhere out there writing things that call for exactly the me I am!
The Colorado Phil Show is a 4 hour independent music variety show. I do it all from my home studio in Thornton, Colorado, U.S.A. For the time being...........
Aside from the 4 hours ACTUALLY putting on the show, I also dedicate about 4 hours a day 7 days a week at writing, creating and producing the next show in order to ensure that what I put out there is a good product. The polishing NEVER ends.
In the coming weeks I am making changes to The Colorado Phil Show, positive changes. It will still feature some of the BEST variety of independent music, that won’t go away. BUT, I am slowly working out the details and putting together a list of guests who can come on the show either live in studio, live by phone or live by recording; to discuss and maybe shed light on a whole host of topics. I feel this is the natural progression from the segment I currently call “weird news”. I’ve had encounters in my life with some of these topics.
For instance, I died once for about 5 to 7 minutes and I had an experience WHILE I was dead. This was in 2013. I want to find a guest to delve into my experience and beyond that.
Since childhood, I’ve had a relative periodically “jump” into my life from wherever it is we go when we die. It’s never scary but it is always timed in such a way that the visit happens during periods in my life where I need a little extra something to “open my eyes” to the deceptions around me. This started in the early 1970s and thankfully continues every so often when I need help and guidance. I want to find a guest to delve into this experience as well and maybe shed some light on what is happening.
About 20 years ago in bitter winter, my x wife and I were smoking a cigarette outside on our back steps. Now, at the time, we lived in a very rural tiny town of less than 300; so we could see the stars quite easily. Then in the space of a few seconds, both my x wife and myself saw what can ONLY be described our FIRST UFO; this would be a fascinating topic to explore in dept.
As I said, these new changes will slowly be rolled out. There is no real timeline on it.
AND still to come; I have a massively yuuge SURPRISE announcement to make on April 20th that will truly change everything. It will also cause a lot of people to say, “Oh!!! That is too perfect!!”
So tune in to The Colorado Phil Show, Monday through Friday, 5 to 9 AM MST on Tri Lakes Radio: www.trilakesradio.com

At first The Colorado Phil Show was a 3 hour weekday afternoon show that quickly became 4 hours when my popularity started to rise.

Just after my first full year I made the move to early mornings, Monday through Friday, 5 to 9 AM MST.

My show is divided into segments. The first 2 segments are at this time just the best variety of local, national and international independent music combined with some real news, some weird news(UFOs & Flateathers), weather updates, music trivia, responses to the question of the day or QOTD, this day in history and this day in music history.

The third hour is The Colorado Phil Show's ALL Colorado Power Hour which is 2 SIX packs of independent muisc artists that were all brewed right here in the Colorado Rockies. because I play more tracks in that hour the other stuff mentioned above only comes into play AFTER the 3rd hour is done.

The last and 4th hour of The Colorado Phil is called the ALL Canadian Indie Hour and features a full hour of ONLY the best Canadian independent music!

Not to be rude or anything but in the last 2 hours of each and every show, 5 days a week; I have a higher number of both Colorado and Canadian listeners. SO SPONSORING ME IS A GOOD IDEA!

I have amazing numbers according to the station itself. My show gets the most listeners.

The problem is that Tri Lakes Radio is VERY new.

I came along after the 1st year. They had maybe 50 bands. I recruited original indie music from literally around the world and put it into rotation. And then the station started growing.

Well, I am here to tell you that I am worth a whole lot more than that. And it appears it is up to me to go out and find the money I know I am worthy of.

Sponsor the whole show, sponsor the news, weather, all Colorado Power Hour separetely, or the ALL Requets hour.

I am willing to work with companies willing to sponsor me and my show!

I deserve better than what I have now.

And as an immigrant to the U.S. (even though it's only from Canada) I have come to realiaize that I am ACTUALLY LIVING the American Dream. I get it now. I have the bug. Nothing is impossible.